Clarity was invited to the Oshwal Association, the UK’s largest Jain organisation, to install an induction loop system for the hearing impaired in the upper hall, as part of the major renovation works at their beautiful centre.

As the names imply the upper hall sits directly above the lower hall and the future plan was to have loop systems in both halls. This requires meticulous design due to what is commonly known as audio overspill, where an individual in one loop will pickup sound interference from a neighbouring loop.

Clarity worked closely with Ampetronic, world leaders in the design and manufacture of audio induction loop systems.  Together we designed a low spill loop that could not be heard outside of the confines of the upper hall, this being the main venue for large events. The resultant low spill design used Ampetronic’s top of the range MLD9 multi loop amplifier with 1000m of flat copper tape, roughly ten times the amount of tape for a conventional loop for a hall of this size, 40m long by 17m wide. The tape was hidden under the new wooden floor in a bespoke array formation.

Audio Frequency Induction Loops (AFILs), also known as induction loops, hearing loops or T-loops, are becoming increasingly commonplace and can be found in diverse situations ranging from bank counters to theatres but are particularly prevalent in churches and many other places of worship.

The supply and installation of an induction loop may be zero rated under some circumstances for those with charitable status.

The way an induction loop works is quite simple: 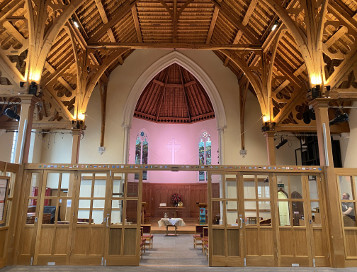