Embassy of the Federal Republic of Germany
London

When you are invited to stay in someone’s home you naturally treat that property with care and respect. Now imagine the responsibility if you, like Clarity, were invited into a listed building in Belgravia, just as the paint was drying following a magnificent restoration project and “then” you are asked to install a sound system. Fainter hearts may have declined such a job in favour of sleeping peacefully at night. However thanks to the level of trust earned over many years of working at different German embassy buildings and our own confidence in the ability of our installation team to perform such work, we accepted the invitation.

The biggest challenge and the one that took the most planning, was how to invisibly route loudspeaker cables onto columns decorated with ornate white plaster mouldings. I am happy to report that Clarity’s installation team did exactly that and complemented the work with slender white speakers that reflected the building’s architectural style particularly well. Once this task was accomplished managing the rest of the sound system became a question of intelligent sound engineering and tasteful design.

The engineering design catered for two particular issues.  Firstly, the same sound system had to operate in both the ground floor and first floor reception areas. We used five JBL “line array” mini column loudspeakers, as shown in the photograph. These units deliver excellent audio quality, especially for speech and feature controlled dispersion characteristics that ensure a consistent sound level across the whole room whilst maintaining the high frequencies everywhere, ensuring clarity wherever you are in the venue.  Two speakers were fitted in the ground floor reception area and three on the first floor, two front and one rear.  Since the sound system equipment was situated on the first floor, for convenience and practicality we installed a second volume control on the ground floor so its speaker volumes could be adjusted without affecting the level of the upper level speakers.

Secondly, particular events would have a panel of presenters inviting questions from the audience.  All participants need to be heard equally well without (in sound/electrical terms) interference and certainly without feedback.  Fortunately we were able to reuse the existing eight Sennheiser radio microphone system (four lapel and four handheld) that we previously installed in another embassy building and coupled this to a newly supplied Shure automatic microphone mixer. The automatic mixer intelligently performs many functions such as; continuously detecting background noise and adjusting volumes accordingly, eliminating ambient sound sources such as air conditioning and preventing each microphone from picking up the sound source of a neighbouring microphone using a soft switching handover algorithm.  Feedback predominantly occurs as the number of microphones increases, with all microphones being on at the same time and when a microphone is used in close proximity to a loudspeaker.  The Shure unit only turns on those microphones that are actually being used, turning the unused ones off instantly and also incorporates an excellent feedback suppressor.  These techniques, that would be almost impossible to perform manually, greatly enhance the experience and effectiveness of large meetings, debates and audience/panel sessions, to name but a few.

The automatic microphone mixer is housed in a rack that also incorporates two existing Australian Monitor 120 watt mixer/amplifiers and a Denon CD player that also easily accepts music inputs from a smart phone, laptop or MP3 player. The rack was housed in a bespoke oak cabinet where we were able to get samples of the oak grain and colour in order to find the best match with the surroundings and décor of the first floor. 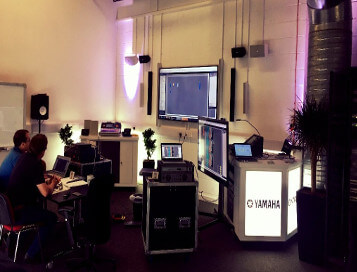 Installing a comprehensive sound system at Yamaha's headquarters to provide a demonstration of how zoning to different rooms is possible. Read more 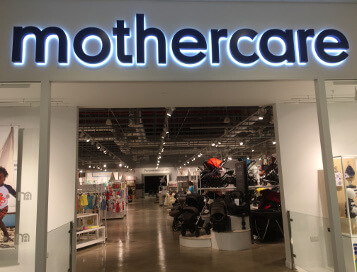 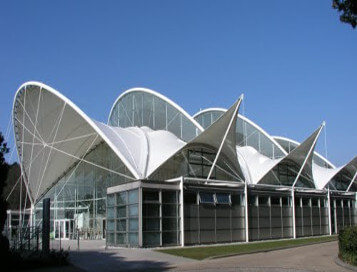 Replacement of their audio control system which can now be used for anything from paging announcements at quiz nights, audio reinforcement for seminars and conferences and even background music for events. Read more